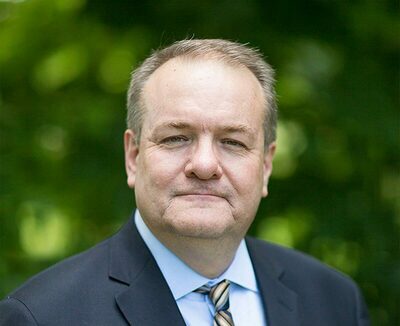 Thomas Fuja, Ph.D., will be assuming the role of interim vice president and associate provost for graduate studies and the interim dean of the Graduate School, effective June 1.

Thomas Fuja, professor of electrical engineering and faculty director of iNDustry Labs at the University of Notre Dame, has been appointed interim vice president and associate provost for graduate studies and the interim dean of the Graduate School, effective June 1.

A member of the Notre Dame faculty since 1998, Fuja conducts research addressing the reliable transmission of information over inherently unreliable and/or constrained communication channels, especially in the context of wireless systems. As faculty director of iNDustry Labs, he plays a vital role in Notre Dame’s collaboration with local industry partners as they seek to thrive in the digital age of manufacturing.

Fuja’s leadership experience also includes a two-year assignment as interim dean of the College of Engineering and 12 years as chair of the Department of Electrical Engineering.

“Tom has a proven record of success as an instructor, researcher and administrator,” said Christine Maziar, interim provost at Notre Dame. “He is uniquely suited to guide the Graduate School during this transitional period, and his appointment was enthusiastically endorsed by University President Rev. John I. Jenkins, C.S.C., and Provost-elect John McGreevy. My sincere thanks to Tom for, once again, answering the call to serve the University in such a capacity.”

“I’m thrilled to have this chance to work with the great team in the Graduate School,” Fuja said. “As a former director of graduate studies and someone who has witnessed firsthand the tremendous growth in research and graduate education at Notre Dame over the last 20 years, I feel privileged to be given the opportunity to help advance such a critical part of the University’s mission.”

Prior to joining Notre Dame, Fuja was on the faculty of the University of Maryland in College Park, and he served as program director for communications research at the U.S. National Science Foundation. He is past president of the Information Theory Society of the Institute of Electrical and Electronics Engineers and a former member of its board of governors. Fuja earned two bachelor’s degrees from the University of Michigan as well as a master’s degree and doctorate from Cornell University.

“Having worked with Tom so closely over the years in his roles as department chair and interim dean of the College of Engineering, I know how deeply committed he is to graduate education. He will be an outstanding interim dean,” said Laura Carlson, vice president, associate provost and outgoing dean of the Graduate School, who will depart the University at the end of May.

The search for Carlson’s successor will follow the process outlined in the University’s Academic Articles.

Established in 1918, the Notre Dame Graduate School has four divisions — engineering, humanities, science and social sciences — as well as programs in the Keough School of Global Affairs, totaling more than 30 departments and programs that offer master’s or doctoral degrees. There are over 2,500 graduate students, from all 50 states and more than 100 nations, and more than 200 postdoctoral fellows at Notre Dame.