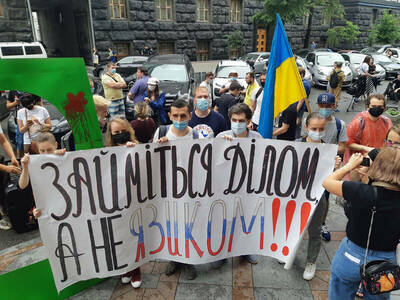 Protesters against the Russian invasion of Ukraine, 2022

In this post, Nanovic Institute Graduate Fellow Joseph Clarkson, a doctoral candidate in the department of political science at the University of Notre Dame, interviews Ukrainian graduate student Oleksandr Pometun about his perspective on the ongoing Russo-Ukrainian War. Clarkson and Pometun first met in 2018 while studying German at the Technische Universität in Dresden and have maintained a close friendship ever since. Pometun is originally from Dnipro, Ukraine, where he graduated from Dnipro National University in 2021. He is now a student of Cognitive Science at the University of Osnabrück, Germany. Here, he reflects on the experience of the war and its broader significance.

Joseph Clarkson: Since we first met, I cannot remember having discussed how the Ukrainian people viewed the possibility of a full-scale Russian invasion of Ukraine prior to the offensive launched in February 2022. What would you say was the general feeling in Ukraine before the invasion?

Oleksandr Pometun: Russia started a hybrid war against Ukraine in 2014. This included the illegal annexation of Crimea and support for “pro-Russian” separatists in Donbas, cyber-attacks on Ukraine, and informational campaigns against Ukraine and Ukrainian citizens around the world. It also built military infrastructure on the border with Ukraine and maintained its military presence there.

As a result, when Russia started building up its military presence on the border with Ukraine in October and November of 2021, many people in Ukraine did not take the threat seriously. It had happened before, and a majority of Ukrainians were not convinced Russia would invade this time. Many local experts were not convinced either. They claimed Russia did not have enough soldiers to occupy the whole country. Therefore, it was believed that Russia was about to strike either in Donbas or in the south of Ukraine from the territory of the Crimean Peninsula. The probability of a full-scale invasion (including from Belarus) was considered low. Most Ukrainians were caught off guard on February 24th, 2022, the day the invasion took place.

Along with many other people, I did not believe that a full-scale invasion was going to occur. I expected Russia to attempt to destroy the Ukrainian economy and not occupy the whole of Ukraine. Even in 2014, I had no illusions about Russia when it invaded Ukraine for the first time. But I still couldn’t imagine that Russia was about to undertake such a massive war of aggression, committing war crimes very early on in the attack and possibly even crimes against humanity as the war has continued.

JC: Ukraine has a long and difficult history, to which this war adds another chapter, with numerous Russian attacks against civilians and civilian infrastructure in Ukraine. How have people reacted to these attacks psychologically? Do you think this has perhaps worked against Russia by strengthening Ukrainian resolve to repel Russian advances?

OP: Russia started attacking civilians and civilian infrastructure on the first day of its full-scale invasion. People in Ukraine woke up in a new reality that morning. They were deeply shocked by the Russian invasion and especially by Russian hostility and brutality. The fact that a neighboring country and its population could commit so many war crimes against the people of Ukraine was not easy to accept. It immediately became clear that Russia was leading a war of annihilation against the Ukrainian state and possibly even the Ukrainian population. Because of the brutality and aggression performed by Russian soldiers, the whole population turned against Russia. The Ukrainian nation became united like never before. Everyone tried to do something to support the country and the army. People started donating money to the army, digging trenches, or building barricades to stop Russian tanks, sometimes with bare hands. Some people even took up arms despite having no military skills and there being a high risk of death. There were also peaceful protests against Russian occupiers in territories over which Russia had taken control.

JC: I was in Ireland earlier this summer for the Laura Shannon Prize Residency organized by the Nanovic Institute. One of the prize winners in attendance, Max Bergholz, wrote a very interesting book that provides an in-depth look at cases of ethnic violence in northwest Bosnia and argues that a strong sense of national identity can be the product, rather than the cause, of violence between groups. Do you think a similar change of identity might be taking place in Ukraine? Has the war changed people’s conceptions of what it means to be Ukrainian, or to be a Russian-speaking Ukrainian?

This started to change in 2014 when Russia illegally annexed Crimea. Many people switched from Russian to Ukrainian, and a huge number of Ukrainian films, books, and songs were created. After the start of the full-scale invasion of Russia in February of this year, the process only accelerated. Ukrainian culture is now experiencing its renaissance. Because of Russian actions, many people gained something for the first time in their life — the feeling of national identity. A strong sense of national identity has been a product of Russian violence rather than its cause.

In fact, I had a chance to experience this process myself. I was born in a “Russian-speaking region,” where Russian culture was dominant until the annexation of Crimea. As a result of Russian brutality, I decided to abandon the Russian language and Russian culture completely. So, I more or less agree with Max Bergholz’s thesis. A strong sense of national identity among “Russian-speaking” Ukrainians was a result of Russian actions and not a reason for them. At the same time, my understanding of Ukrainian identity remains the same as it was before the full-scale Russian invasion. From my perspective, Ukrainian identity is not bound to any specific language or culture. Being Ukrainian means supporting freedom of speech and democracy, respecting other people inside or outside of the country, participating in the political life of the country, educating yourself, and honestly representing the country in the world. Russian propaganda made a lot of effort to divide Ukraine by language, history, geography, and many other factors. It also made much of the world think Ukraine had some kind of “civil war” and that Russia was just protecting the “Russian-speaking” population. But this was not the case. In reality, Russia has led a war of annihilation against Ukraine, regardless of language. Both Russian and Ukrainian-speaking civilians have been dying from Russian bombs, and both Russian and Ukrainian-speaking people have been defending Ukraine with weapons in hand.

JC: After the annexation of Crimea in 2014, the Ukrainian Orthodox and Russian Orthodox churches split apart. As you know, the University of Notre Dame is Catholic, but what you may not know is that, since the outbreak of the war, Notre Dame has increased cooperation with the Ukrainian Catholic University in Lviv. Because of these kinds of developments, I am curious about what role, if any, you see religion playing in the conflict.

In contrast, Ukraine does not use religion as a weapon of war. In Ukraine, the church is separate from the state and is not a part of the Ukrainian secret service. At the same time, the Ukrainian church spiritually supports the Ukrainian army in the fight against the aggressor. It also assists refugees from occupied territories.

JC: As a Ukrainian studying in Germany, what has been the general reaction to the war there? Do you think public opinion in Germany is likely to change this winter, especially with disruptions to the natural gas supply coming from Russia? And, are people in Ukraine worried about the coming winter and the effects it might have on public morale throughout Europe?

OP: Before the Russian invasion, the German government was on the Ukrainian side. But on the other hand, Germany was dependent on Russian resources, especially gas. So, Germany took little action to support Ukraine. When the war broke out in February this year, the German population was shocked. It was clear that the German attitude to Russia changed. The idea of assisting Ukraine became popular among the government and the population. The German government announced a “Zeitenwende,” the beginning of a new era in German foreign policy. Germany started actively supporting Ukraine and supplying it with weapons, finances, and non-military aid. Germany has also taken many refugees from Ukraine. Germany increased government spending on the army and began to strengthen its eastern flank of defense.

Energy prices have grown dramatically since the beginning of the Russian invasion. Also, a huge number of refugees from Ukraine reached Germany and other European countries. There are some worries that public opinion might change in the coming winter. Some politicians are using these factors to get public support, and they have some local successes. But, in general, German society keeps standing with Ukraine and the Ukrainian people. The German public understands the importance of providing support to Ukraine and the risks of Russian occupation. And this is not likely to change this winter.

From the first days of the invasion, Russia has been conducting attacks on critical infrastructure facilities in Ukraine (power plants, power lines, gas and oil storage). Due to that, there are worries among the Ukrainian population about running out of electricity or heating in winter. People in Ukraine are also worried that European countries will stop assisting Ukraine. If Western support disappears, it will be much more difficult for the Ukrainian army and population to liberate occupied territories and maintain long-term peace on Ukrainian land.

Joseph Clarkson is a fourth-year Ph.D. student in political science specializing in political theory and international relations. His dissertation focuses on the sources of political unity in the state theories of Carl Schmitt and Hermann Heller, two important theorists of the Weimar Republic. Joseph’s previous projects focused on the intersection of international relations and the history of political thought, including papers on Hegel’s account of war and Rousseau’s role in the formation of structural realism. Before coming to the University of Notre Dame, Joseph studied Philosophy, Classics, and German through the University Scholars Program at Baylor University, where he received his B.A. in 2019. Joseph is originally from Burnet, Texas.

Originally published by Joseph Clarkson at eitw.nd.edu on November 15, 2022.