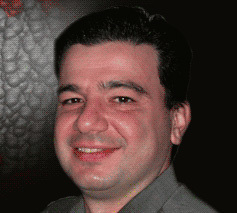 The National Science Foundation (NSF) awarded Yiannis Kaznessis, a 1999 Chemical Engineering Ph.D. recipient at Notre Dame, a 2007 CAREER Award, one of its most prestigious awards for new faculty members. The CAREER program recognizes and supports the early career-development activities of those teacher-scholars deemed most likely to become the academic leaders of the 21st century. Kaznessis, a tenured associate professor at the University of Minnesota, which has the top-ranked chemical engineering department in the United States, received $400,000 from the NSF in research funds over the next five years. The topic of his research proposal is “Mathematics for Biological Engineering.”

Kaznessis and his group are engineering smart bacteria that “know” how to best produce ethanol from biomass. Ethanol is an attractive alternative to fossil fuels for energy generation, because fossil fuels are responsible for increased atmospheric carbon dioxide. Kaznessis uses synthetic biology to build a tiny control device that is inserted in bacteria. Microorganisms carrying this device will sense the type of sugars present in the feed biomass and respond by switching on or off paths of their metabolism. Smart bacteria that can sense changes in their environment and respond accordingly are ideal for developing relatively inexpensive ethanol-producing processes of all sizes—from small tanks in a farm to large reactors producing tons of ethanol.

Kaznessis is also the director of the University of Minnesota’s Summer Bioinformatics Institute.