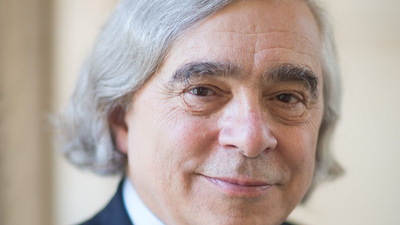 Ernest J. Moniz, U.S. secretary of energy from 2013 to 2017, will deliver the keynote address during the Graduate School’s annual Commencement Ceremony on Saturday (May 14) at the University of Notre Dame. President Rev. John I. Jenkins, C.S.C., will confer nearly 300 doctoral degrees and more than 500 master’s degrees during the ceremony, which will take place at 9 a.m. at Notre Dame Stadium.

An internationally recognized leader in energy technology innovation, nuclear security and environmental stewardship, Moniz played a key role during his time as secretary of energy in negotiating the Iran nuclear agreement in collaboration with the U.S. secretary of state. He also helped to place energy science and technology innovation at the center of the Paris Agreement on climate change.

Moniz is currently the Cecil and Ida Green Professor of Physics and Engineering Systems Emeritus at the Massachusetts Institute of Technology and special advisor to MIT’s president. He maintains concurrent roles as co-chairman of the board and chief executive officer of the Nuclear Threat Initiative and as CEO of the Energy Futures Initiative. Moniz joined the MIT physics faculty in 1973 and has served the institution for decades in a wide range of research and leadership positions.

Laura Carlson, vice president, associate provost and dean of the Graduate School, praised Moniz for his leadership and his example to the 2022 graduates.

“The constant refrain to our graduate students is that ‘your research matters,’ and we challenge them to be a force for good in the world,” Carlson said. “Dr. Moniz embodies these principles in every way. From his diplomatic efforts on nuclear deterrence to his passion for helping develop clean energy technologies, he has shown all of us a roadmap for truly making a difference in the world. We are extremely grateful to Dr. Moniz for his willingness to share with our graduates and indeed, all of us, some of the important lessons he has learned along the way.”

Separately, the Graduate School has announced the following student, faculty and alumni awards for the 2021-22 school year:

Originally published by Erin Blasko at news.nd.edu on May 10, 2022.