The Graduate School at the University of Notre Dame recently received the first wave of findings from its involvement in the PhD Career Pathways Project facilitated by the Council of Graduate Schools (CGS). The project, funded by the Andrew W. Mellon Foundation and the National Science Foundation, surveys current and former doctoral students over a period of three years to identify patterns in postdoctoral career paths. 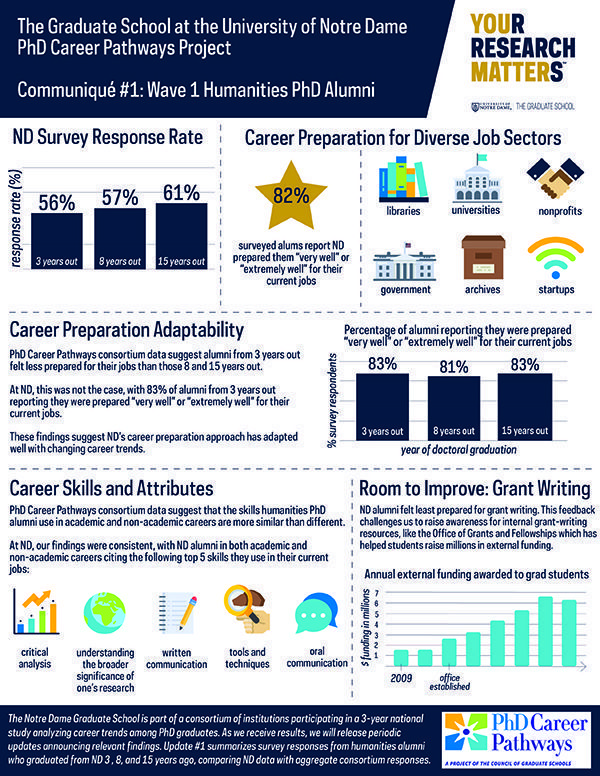 The study canvasses doctoral students and alumni from all four of the Graduate School’s four major divisions (humanities, science, social science, and engineering). The first wave of findings was just released by CGS, focusing on responses from humanities alumni who graduated from Notre Dame three years, eight years, and fifteen years ago.

Laura Carlson, vice president, associate provost, and dean of the Graduate School traveled to Washington D.C. earlier this month to share Notre Dame’s findings with fellow principal investigators from the 65 other institutions participating in the study. At the meeting, she discussed the communication strategy that Notre Dame will adopt, publishing infographics in lockstep with the CGS press releases that profile the Notre Dame data juxtaposed with the national trends from the CGS data. This approach leverages the national attention given to the project in the media, and enables benchmarking against peers.

“It’s important that we share findings from the Career Pathways Project with key partners here at Notre Dame, who can use the data to enhance professional development and career preparation tactics,” Carlson said. “The Notre Dame data, especially in comparison to the national trends, offer invaluable insight into what our graduate students find valuable in their training.”

Communique #1 presents data from humanities PhD alumni who graduated 3, 8 and 15 years ago. Carlson highlighted the high response rates: 56, 57 and 61 percent, respectively. “Notre Dame had one of the highest response rates among its peer institutions, which speaks to a sense of long-lasting community Notre Dame fosters among its students. I am very appreciative of our graduate alumni and their participation in this project signals their dedication to our graduate community even years after leaving our campus.”

Communiqué #1 also illustrates Notre Dame’s successful career preparation: 82 percent of surveyed alumni said that Notre Dame prepared them either “very well” or “extremely well” for their current jobs, which span a diverse range of fields, from national libraries, to major universities, to startups.

Across the consortium of participating institutions, the Career Pathways Project also found that humanities alumni use similar skills whether they are in academic or non-academic careers. This was the case at Notre Dame as well. The top five skills and attributes that Notre Dame alumni identified as important to their current jobs were critical analysis skills, the ability to understand the broader significance of one’s research, written communication skills, a firm grasp of tools and techniques, and oral communication skills.

In contrast, the skill for which Notre Dame alumni felt least prepared was grant writing. This finding helps the Graduate School strategize enhancements to its professional development initiatives, including the need to continually communicate its services.

“We now have in place dedicated resources to help students improve grant-writing skills, such as our Office of Grants and Fellowships which has enabled students to win millions in external funding,” said Carlson. “The survey results make clear that we need to better communicate the importance and impact of these resources for future career trajectories.”

The Notre Dame Graduate School will be featured in an upcoming article in the MLA journalProfession. Carlson has also been asked to serve on the Deans’ Leadership Group for CGS’s Understanding PhD Career Pathways for Program Improvement project.

“Because of the engagement of our surveyed alumni and students, we ’ve been very successful participants in this study so far,” Carlson said. “This success has afforded us credibility among our peers and given us the opportunity to contribute Notre Dame’s voice to important conversations about doctoral career preparation across the country.”

In conjunction with a recent release by CGS of the next wave of data, the Graduate School will soon release Communiqué #2, which will focus on trends among alumni across all divisions who have pursued careers in teaching.