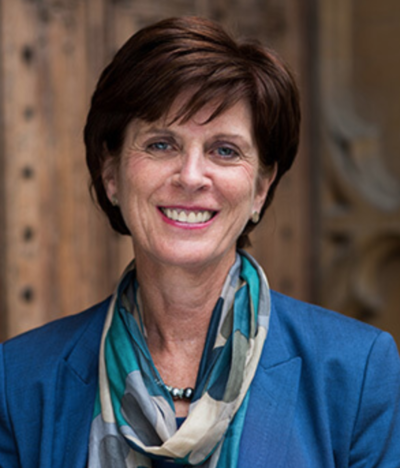 Louise Richardson, vice-chancellor of Oxford and recipient of an honorary degree at Notre Dame's 2018 Commencement

The Graduate School’s annual Commencement Ceremony will take place on Saturday, May 19, at 10:00 a.m. in the Compton Family Ice Arena.

During the ceremony, the University will confer 286 doctoral degrees and 500 master’s degrees, as well as present several awards to distinguished members of the Graduate School community.

Louise Richardson, vice-chancellor of Oxford since 2016, who is receiving an honorary degree (doctor of law) from the University, will deliver the ceremony’s commencement address. The first woman to lead Oxford, Richardson is an Irish political scientist specializing in international terrorist movements. She previously served as the University of St. Andrews’ first female principal and vice-chancellor, following a tenure as the dean of Harvard’s Radcliffe Institute for Advanced Study, and several professorships at Harvard from which she holds her doctoral degree.

“Dr. Richardson embodies the Graduate School’s core conviction, your research matters, as her zeal and curiosity for international studies have positioned her to offer concrete steps against terrorism and towards peacebuilding. Moreover, she is a role model for female leadership in academia,” said Laura Carlson, vice president, associate provost, and dean of the Graduate School. “I am delighted that her example, in concert with those of our admirable awardees, will launch our graduate students from the University into the world, where they’ll have their own opportunities to propel research that matters in powerful and unique ways.”

The Graduate School Awards recipients are as follows:

In addition, the ceremony will honor the recipients of the Eli J. and Helen Shaheen Graduate School Awards, which recognize the top graduating doctoral students in the divisions of engineering, the humanities, social sciences, and science.